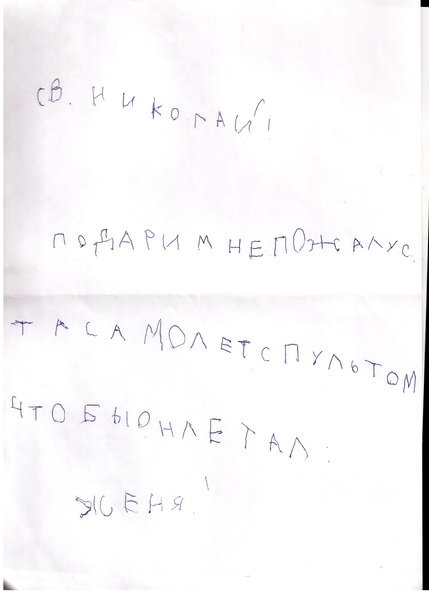 These children are in need of extra care. High risk of contracting infections, medical treatment and strict diet are part of their childhood along with friendship, love and faith in miracles. Even with the outbreak of the war, this faith continues to live in children’s hearts.

In early December, 2014, Donbass SOS. staff was touched by poignant letters from HIV-positive children in the zone of anti-terroristic operation (ATO). The letters came from 54 children aged 3 to 15 years old, living in Yasynuvata, Dobropillya, Snizhne, and Torez. They sincerely anticipated and hoped for answers. “Let there be peace!” – reads one of the drawings in the letter, asking for a long dreamed toy for St Nicholas Day. There was very little time to collect and deliver the presents to ATO zone by the Day.

Not without reason December is considered to be the time of miracles. A great number of people have joined the campaign of presents collection for HIV-positive children. Donbass SOS. hotline volunteers, their friends and relatives around the world took up the challenge with the tight deadline.

“Work at the hotline reminded a beehive (boiled), as our volunteers had to sort out and match requests. But all together we cooped!” – cheerfully notes , Yulia Galagan, coordinator of the Donbas SOS hotline. “All toys had to be brand new, because the children’s weak immune system can’t resist infections.”

A volunteer with an open mind and big heart, Lesya Skubko, asked her friends to join the initiative. This is how the Muslim Women Organization called Maryam became the patron of the collection. Every present: teddy bears, legos, bright dolls and others, bore a little card written by children with love. Muslim women with their kids carefully wrapped every present.

We would like to thank everyone for their compassion and tolerance. Love has no religion or nationality. It unites us in a single cause to help others as we would like to be helped ourselves. On behalf of all HIV-positive children and their parents, on behalf of all children whose dreams became true due to your contribution – thank you very much!