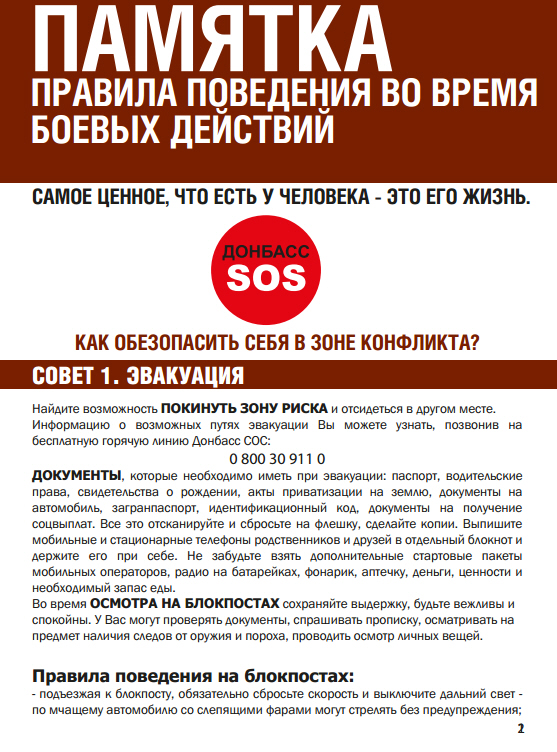 The anti-terrorist operation has been going on for 10 long months in Donetsk and Luhansk regions. Local violence quickly escalated into a full-fledged military conflict with many victims, destruction, forced relocation from the combat zone and other dire consequences. The situation in the east has clearly demonstrated how neglect of one’s own safety and preparation for emergency can be devastating for civilians. That is why the volunteer organization Donbass SOS. a number of partner funds and individuals developed a Memo on Life-saving Rules During the Fighting.

Since the foundation of our organization, our main objective is informational support of Donbass civilians, affected by the horrors of war. This is not the first memo developed by the Organization. It includes the most important and concise recommendations on what to put to ‘alarm bags’, first aid kit, how to behave under shelling and pass checkpoints. Also it tells about the basis of the first aid and psychological self-help. There are telephone numbers of the main hotlines and social services in the end of the memo.

We would like to thank everyone who participated in the preparation of this information self-defense toolkit. In particular:

– IF “Renaissance” (a grant received from the Fund allowed us to create a memo and collect data for it);

– Volunteer Initiative “Kryla Shchedrosti ta Turboty” (Wings of Generosity and Care) for print and dissemination of memos in Slovyansk, Avdiyivka, Marinka, and Krasnogorivka;

– USAID for the print and memos distribution in Kharkiv.

We also want to thank organizations and helpful volunteers for their help in the distribution of leaflets in the field:

– Ministry of Emergency Situations at the railway station in Kyiv, as well as Debaltseve, Slovyansk and Kramatorsk;

– The initiative “Responsible citizens” in Donetsk;

Last, but not least, we are grateful to our pro-bono designers Halushko Anastasia, Doroshuk Maryna and Lopatchenko Sergiy.

Memos have been delivered to Slavyansk, Kramatorsk, Artemivsk, Donetsk and Mariupol. Also soon more leaflets will be send to Lugansk, Alchevsk and other cities.

In these turbulent times, we have to learn a lesson at a heavy price that a chance of survival directly dependents on our preparedness for a possible emergency. The main point is to keep a clear head and determine what can be done for saving life. The Donbass SOS team hopes that the developed memo provides the necessary information and helps to prepare for the worst case scenario. Only then we assume that the work done is not in vain.